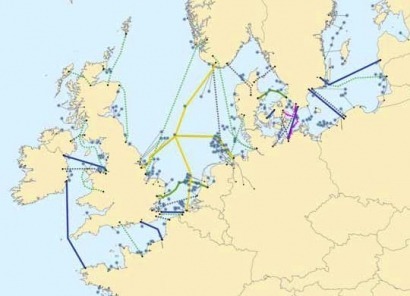 Offshore grids, connecting North and Baltic Sea wind farms to electricity consumers, will be substantially cheaper to build than expected. Building "hub connections" at sea instead of using cables to connect single wind farms individually to the shore will result in investment costs that are €14 billion lower. Additionally if these hub connections were combined with an even more interconnected "meshed grid", the necessary additional costs of €5 to 7 billion would be compensated by €16 to 21 billion of additional benefits over 25 years of grid operation.

The cost for creating the complete meshed offshore grid including wind farm connections would amount to about 0.1 Eurocent per kWh consumed in the EU27 over the project life time.

There have been numerous estimates as to the costs such a grid may involve and the form it may take. The OffshoreGrid project, co-financed by the European Commission, proves the financial benefits of building a meshed European grid offshore and outlines two cost-efficient designs. However, it warns that a new regulatory framework is needed to enable its construction.

"As a concrete roadmap for further grid developments, the OffshoreGrid report sends a credible and urgent call for action to our policymakers and regulators. It should help trigger and steer timely investments, and deepen the international exchange and collaboration that are necessary for an efficient Europe-wide grid", says Geert Palmers, Chief Executive Officer of global renewable energy consultancy 3E, who acted as the project coordinator.

"In order to facilitate the development of an offshore power grid, the North and Baltic Sea countries have to adapt the legal framework together." said Stephan Kohler, Chief Executive Officer of the German Energy Agency (dena). "For example, the compatibility of grid connection policies and support mechanisms has to be pursued with high priority. We need innovative concepts for the distribution of costs and benefits for the construction of new transnational power grids."

Christian Kjaer, Chief Executive Officer of the European Wind Energy Association (EWEA) added: "If the right regulatory measures are put in place to enable this improved grid development, substantial economic benefits can be reaped through the projected savings in investment costs. Also this will significantly increase the security of electricity supply. In a truly liberalised European energy market this should have a positive effect on our electricity bills".