Friday, 17 January 2014
0
Robin Whitlock
The 168MW Musselroe wind farm, the largest wind farm in Tasmania, has now been officially opened by the country’s Premier Lara Giddings and is generating enough energy to supply up to 50,000 homes 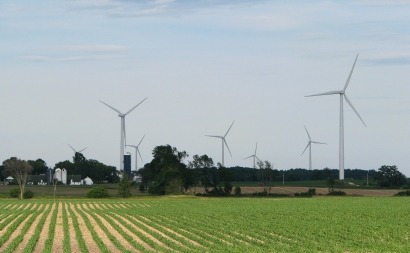 The power generated by the Musselroe facility is equivalent to the residential power needs of the towns of Burnie and Devonport combined. It will also prevent 450,000 tons of carbon dioxide from being released into the atmosphere each year.

Construction of the $394 million wind farm began in December 2011 and its completion marks the extension of Hydro Tasmania’s interest in wind energy, a policy that began on King Island in the late 1990’s and continued with two more wind farms in north-west Tasmania.

“Our involvement in wind has shown it to add considerable value through expanding Hydro Tasmania’s generation portfolio,” said Hydro Tasmania Chairman Dr David Crean. “It also complements perfectly our hydro capability, providing the renewable energy certificates to meet our retail obligations and generating profit and value for our shareholders, the people of Tasmania.”

Dr Crean added that as Australia’s largest renewable energy generator Hydro Tasmania was committed to strategic new investment in renewable energy as well as investment on existing assets. He said that the project has only been made possible because of the country’s renewable energy target (RET), which began in 2001 under the Howard Government and has been supported by successive federal governments since.

“The RET is a key driver for investment in wind farms as well as for the refurbishment and upgrade of our existing hydro plant” said Dr Crean. “Its continuation will support investment and job creation throughout rural and regional Tasmania and Australia, as well as contributing to energy security and greenhouse gas abatement in the Australian energy sector.”

Stephen Ross, General Manager of Woolnorth Wind Farm Holdings, said that the relationship between Shenhua Clean Energy and Hydro Tasmania is significant because it is the first investment by a Chinese company in renewable energy in Australia.