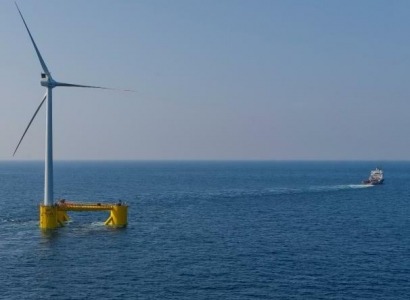 In addition to being the first offshore wind turbine in Portugal, this is the first offshore wind turbine to be installed without the use of any heavy lift vessels or piling equipment at sea. All final assembly, installation and pre-commissioning of the turbine and substructure took place on land in a controlled environment. The complete system was then wet-towed offshore using simple tug vessels.

The WindFloat is equipped with a Vestas v80 2.0MW turbine capable of producing enough electricity for 1,300 households. The system is located 5km off the coast of Agucadoura, Portugal, and has already produced in excess of 1.7 GWh. The WindFloat ushers in a new era in the offshore wind industry permitting utilities to target the highest quality wind resources, independent of water depth. In addition, projects can realise significant cost and risk reductions as a result of the onshore fabrication and commissioning scheme.

The successful installation and on-going operations of the WindFloat in Portugal is the result of hard work and foresight on part of the WindPlus joint venture, comprised of EDP, Repsol, Principle Power, ASM, Vestas Wind Systems A/S and InovCapital including a subsidy from the Innovation Support Fund (Fundo de Apoio a Inovacao - FAI). Additionally, over 60 other European suppliers, 40 of them Portuguese, supplied key components to the project. Repsol has recently joined the Windplus JV as a significant shareholder bringing additional offshore experience and operational capabilities to the project team.

"Through WindFloat, EDP has once again demonstrated its clear capacity for foresight and its excellence in execution. Not only does this technology make EDP a focus of attention in the international offshore market, it also represents a milestone in the exploitation of endogenous resources, reduction of dependence on foreign imports and potential utilisation of the Portuguese maritime cluster, with positive impacts on employment and exports," sys Antonio Mexia, CEO of EDP.

The WindFloat has already endured a harsh winter environment in the open Atlantic, having withstood waves of up to 15 metres at the close of 2011. The system performed remarkably and within predictions anticipated using sophisticated design tools. Further, power production figures support the joint-venture's vision of the WindFloat's significant and game-changing role in the global offshore wind market.

The WindFloat and subsequent Portuguese offshore projects represent a great industrial opportunity for Portugal. The country's existing infrastructure, such as shipyards, could be adapted to support an offshore industry with tremendous domestic and global growth potential.

"Through this first project we have demonstrated and proven the WindFloat technology. The entire system was fabricated using domestic resources, suppliers and infrastructure. Since its connection to the grid, the WindFloat has delivered an energy profile far better than that of local onshore wind installations,” explains Alla Weinstein, President & CEO of Principle Power. “With Repsol entering the joint venture, Windplus is now in a position to advance the next phase of the project calling for a 25+ MW pre-commercial array of turbines. With possible support from the EC NER300 funding scheme this second phase of the project would prove the scalability of the WindFloat design and the intrinsic opportunities to reduce the cost of offshore wind deployments while creating an entirely new industrial base in Portugal."