Leading offshore wind power in the world with 1.5 GW

Monday, 18 July 2011
1
Mike McGovern
The British coastline now boasts more than 1,500 megawatts of offshore wind capacity. The United Kingdom has just passed that milestone - 1.5 GW – subsequent to the commissioning after several months of delay, of the first phase (183.6 MW) of the Walney offshore wind farm, being developed by Dong Energy and Scottish & Southern Energy (SSE). 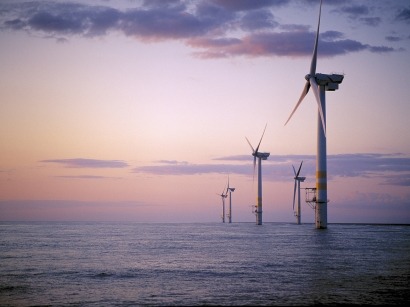 According to SSE, commissioning tests have been completed and the wind farm is now available to generate electricity. As a result, SSE has added 46MW to its total power generation capacity.

In addition, the consortium led by Dong has already begun the second phase of the offshore array: "The first turbine was installed in early June 2011 and a further 17 have since been installed,” reveals SEE.

“This is an important milestone in SSE’s programme of investment in large capital projects and a significant addition to the company’s asset base. With good progress also being made on phase two of Walney, I am confident that the wind farm as a whole will be commissioned, as planned, next year,” commented Colin Hood, Chief Operating Officer of SSE.

In 2010, the Crown Estate, a holding of the British Royal Family which owns and manages the seabed around the British isles, awarded the same consortium the rights to develop a further 750 MW of offshore wind capacity in the area. Meanwhile, Dong and SEE estimate that the two phases of Walney will produce around 1,300 GWh (gigawatt hours) of electricity in a typical year. This is equivalent to an average load factor of around 43% or 3,767 hours of operation.