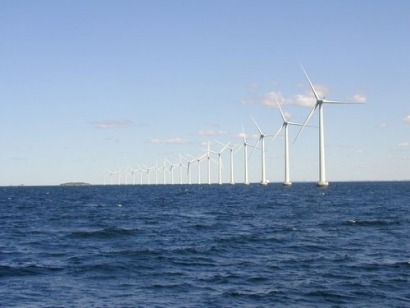 The Navitus Bay wind farm project, off the coast of the Isle of Wight in Poole Bay, has had to be reduced in size after the developers EDF Energy and Eneco moved to scale back its visual impact. The developers acted in response to consultations with statutory consultees and local communities. The changes include moving the wind farm further out to see and reducing its size as well as moving planned turbines away from key areas such as Durlston Head, The Needles and Bournemouth.

The wind farm will now be sited some three kilometres further away from Bournemouth, Christchurch and Poole. This will also protect navigational safety for vessels entering the Solent. There will be a 35% reduction in the number of turbines, from 333 to 218. This also means that the largest turbines will now be smaller than previously proposed, reduced in size from 210 metres to 200.  Unfortunately this will also mean a reduction in the overall capacity of the wind far, from 1200MW to 1100MW, however this still means an average generation capacity equivalent to the electricity needs of 775,000 average households with a reduction of up to 1,150,000 tonnes of carbon dioxide per year.

“We have moved the site significantly further from the coast, reducing the potential visual and navigational impact of the Wind Park” explained Mike Unsworth, Project Director for Navitus Bay Development Limited. “In addition, we have reduced the maximum number of turbines in the proposal and reduced the height of the tallest turbine. We feel that these significant adjustments to the plans strike a good balance between responses that we have had from consultees and the technical viability from an environmental, engineering, shipping and commercial perspective. The changes demonstrate that Navitus Bay is fully engaged in the debate and willing to listen.”

Public consultations on the wind farm will go ahead in 2013 at various locations across Dorset, Hampshire and the Isle of Wight. These will feature new and improved visualisations as well as an interactive 3D model of the site and onshore cable route.