Offshore wind has to get cheaper to grow, says IHS market study 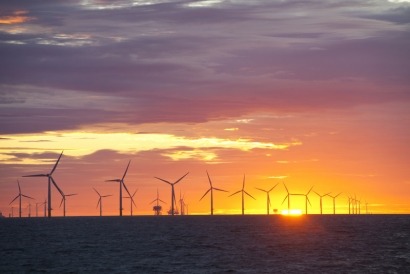 Today, the UK celebrated as the world's largest wind farm, the Walney project off the Cumbrian coast, was fully commissioned. The wind farm has 102 turbines and boasts 367 MW of capacity and is expected to provide about 320,000 homes with renewable power.

The commissioning of the Walney wind farm is another milestone in the UK’s offshore wind industry, which Energy Secretary, Ed Davey, revealed today attracted £1.95 billion of investment in the last financial year.

Speaking at RenewableUK Global Offshore Wind 2012 in London, Davey highlighted that more wind capacity was needed to drive down the cost of clean electricity for consumers. He estimates that “truly competitive” offshore wind power electricity is less than a decade away.

“Make or break” for offshore wind

However, a new market study entitled Global Offshore Wind Energy Markets and Strategies: 2012 – 2025 by intelligence provider HIS, says the offshore wind sector faces a “make or break” window until around 2016 when it needs to cut costs or it could face a rapid decline as a non-competitive technology.

Most projects are built at the moment within a relative “comfort zone” of up to 30 metres in depth and at 30 kilometres distance from the shore, but these developments will soon have to move out to deeper waters as easier sites get tapped.

“The industry’s challenge in the longer term will be to increase capacity additions at lowered costs, but in even more difficult conditions,” said Eduard Sala de Vedruna, a research director at IHS and one of the authors of the report. “Costs remain high at the moment and financial backing for capital-intensive projects is needed as the next generation of offshore projects heads for uncharted territory.”

Costs have risen in recent years, driven by competition to secure turbines and the development of more technically complex projects, as sites near the coast or in shallow water get developed.

In the study, IHS forecasts that global offshore wind investment, including transmission, is set to climb nine-fold between 2011 and 2025, rising from $6 billion to $52 billion.

The global offshore market is expected to reach nearly 95 gigawatts of installed wind energy capacity by 2025, compared with 4.2 GW at present, which accounts for just two percent of wind energy worldwide.

Europe will continue to lead the offshore wind market, with the UK and Germany both installing more capacity than China over the forecast period. China leads the offshore charge in Asia, with more than 300 MW of installed capacity as well as aggressive targets and large projects in the pipeline.