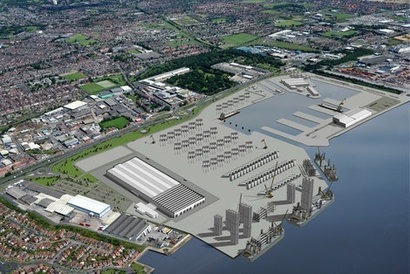 Mr Davies was accompanied by Siemens global executives on a visit to the city’s Alexandra Dock where Siemens will operate blade manufacturing, assembly and servicing facilities. Siemens, with its partner Associated British Ports, is investing £310 million in the development which will create 1,000 direct jobs with many more during the construction phase and in the supply chain. European renewables industry leaders also attended in order to record an important milestone in the Hull project.

As work begins on the facility, it was announced that the first wind farm to benefit from Hull is Dudgeon wind farm, located off the coast of Norfolk, which will be using the facility and quayside for part of its installation. Siemens has been selected as the supplier to Dudgeon, which is owned by Norwegian energy companies Statoil and Statkraft and Abu Dhabi’s renewable energy company, Masdar, and is operated by Statoil.

The Dudgeon wind farm will incorporate 67 of Siemens’ 6 MW offshore wind turbines, which have the world’s longest blade in commercial operation, at 75 metres in length. It will have an overall capacity of 402 MW, enough power to supply more than 410,000 UK households with clean renewable power.

“The start of construction on the Hull site is a landmark in the development of what will be world-class offshore wind manufacturing and assembly facilities” said Michael Hannibal, CEO Offshore of Siemens Wind Power and Renewables Division. “We are delighted the Secretary of State has joined us today to mark this occasion and that we have been joined by partners and customers who are driving forward the offshore wind industry in the UK and Europe. We are also pleased to be able to announce so far in advance the destination of the first turbines to be shipped from Hull.”

Mr Hannibal added that the UK offshore wind market has seen strong growth, with even greater future potential. 14 GW of wind power capacity is to be installed in UK waters by 2020 in order to achieve environmental objectives and security of power supply. The Hull facilities will provide a major contribution to the growth of the offshore wind industry in the UK and will help the government to drive down the costs of renewable energy.

ABP has appointed the GRAHAM Lagan Construction Group Joint Venture to develop the Alexandra Dock site for the Siemens facilities and significant enabling work has now begun. Work to be carried out by the joint venture contractors will include building three new berths and a roll-on, roll-off ramp.

Construction of buildings for the blade manufacturing and wind turbine assembly facilities is due to begin in summer 2015, depending on planning consent. The production of the first blades is scheduled for winter 2016 and Siemens has already begun hiring for jobs based in Hull with recruitment continuing throughout this year and into 2016.