Tuesday, 17 May 2011
0
Toby Price
This month Vestas revealed it has signed an option agreement for land at the Port of Sheerness in Kent. The leading turbine manufacturer said a a fully integrated offshore wind turbine manufacturing and installation facility would be constructed “subject to a satisfactory order intake on the V164-7.0 MW in the UK”. 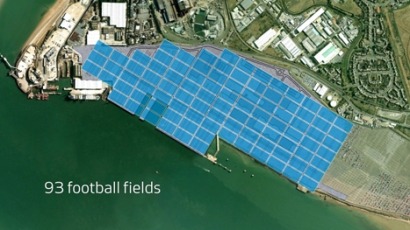 The recent launch of the V164-7.0 MW, Vestas’ first ever purpose-built offshore turbine, introduced a turbine of epic proportions. A turbine with components of this size demands new manufacturing facilities and in order to prepare for the planned 2015 serial production of the new turbine Vestas has signed an agreement for 70 hectares of land [see inset] at the Port of Sheerness in Kent to eventually serve these purposes.

The UK represents the world’s largest offshore wind market and as such has a massive offshore project pipeline. The UK Round 3 projects alone account for 32GW. Vestas is committed to working with the UK government and offshore wind stakeholders to turn this pipeline into operational offshore wind farms and thereby ensuring not only sustainable energy for the UK, but also a large number of new jobs being created.

Vestas is prepared to make the necessary significant investment in turning the option into a full lease and building the planned new production facilities, thereby creating more than 2000 direct and indirect new jobs – provided the V164-7.0 MW order pipeline materialises as expected.

Job creation is a two-way street

With this option agreement in place, Vestas has shown our willingness and commitment to making major investments benefitting the UK, but the company stresses that it alone cannot make it happen.

“We have shown our intentions to make major investments and subsequent job creation, but it is evident that we don’t just jump head first into an investment of this size. We need to make sure it makes sense business wise,” says Anders Søe-Jensen, President of Vestas Offshore and continues: “Before our customers can provide us with the needed order pipeline, they need to see stability in the market and a long term political and regulatory certainty that ensures their business case. Making that happen lies in the hands of the policy makers, so we are looking forward to seeing the UK government providing the best possible terms for the offshore wind industry to truly take off and the potential jobs becoming a reality”.

In order to secure the needed strong and predictable V164-7.0 MW order pipeline, Vestas reveals that it is seeking “market and regulatory certainty from a transparent, long-term and stable policy framework” and “public investment support to de-risk and reduce the large infrastructural investments required to build a facility of these proportions”.

Commenting on Vestas’ plans, Peter Symons, Director of Business Development at Locate in Kent (an agency that helps businesses to locate or expand in the region), said: “Vestas’ commitment to Kent reflects something we’ve known for a long time – the county represents an excellent opportunity for the offshore wind industry”.

Symons shares Vestas’ concerns about ensuring regulatory certainty and public investment support, explaining that Locate in Kent has been working closely with SEEDA, UK Trade and Investment, Kent County Council, the councils of Swale, Thanet and Medway and The Department of Energy and Climate Change to help secure investments in offshore wind.

“We’ll continue to work hard to ensure Kent and Medway’s sites are considered for all future opportunities and to help create jobs and secure investment for the wider benefit of the local economy,” he added.

Vestas Northern Europe is one of the seven Sales Business Units in the Vestas Group. The company manages all sales, construction and service operations in the countries of Sweden, Denmark, Norway, Finland, the Baltic States, Poland, Ireland and the United Kingdom. As of 31 December 2010, Vestas Northern Europe has delivered a cumulative capacity of 6,389 MW, representing 14 per cent of Vestas’ global capacity.

Today, Vestas announced that it has received an order from E.ON Climate and Renewables UK for delivery of 25 units of the V80-2.0 MW wind turbine. The order has a total capacity of 50 MW and the turbines will be installed at the Camster wind farm in Scotland near Wick, Caithness, and is expected to provide electricity equivalent to about 37,000 homes and save more than 75,000 tons of CO2 per year.