Wednesday, 03 July 2013
0
Dan McCue
US President Barack Obama used a stop in Cape Town during his just concluded three-nation tour on the continent, to unveil Power Africa, a new initiative intended to double access to power in the sub-Saharan region. 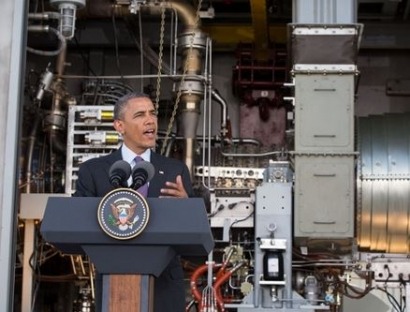 Then, while speaking at the Ubungo Power Plant in Dar es Salaam, Tanzania, Obama expanded on that announcement, using the unique tale of the facility to further explain how Power Africa will work.

"With support from the Millennium Challenge grant, General Electric, and Symbion, they got it up and running again [and[ more Tanzanians got electricity," Obama said. "This plant represents the kind of public-private partnership that we want to replicate all across the continent."

As the president went on to explain, through Power Africa, "public and private resources will be matched with projects led by African countries that are taking the lead on reform.

"In this case, African governments commit to energy reforms," he said.  "And the US is committing some $7 billion in support, and private sector companies have already committed more than $9 billion.  And this is just the beginning -- because we look forward to even more companies joining this effort."

The president characterized these commitments as a "win-win" for everybody involved.

"It’s a win for Africans -- families get to electrify their homes; businesses can run their plants; investors can say if we locate in an African country, that they’re going to be able to power up in a reliable way.  All this will make economies grow.  It’s a win for the United States because the investments made here, including in cleaner energy, means more exports for the US and more jobs in the U.S.  And, obviously, a growing market in Africa will mean more opportunities for all countries," Obama said.

More than two-thirds of the population of sub-Saharan Africa is without electricity, and more than 85 percent of those living in rural areas lack access.

Power Africa will build on Africa’s enormous power potential by harnessing renewable geothermal, hydro, wind and solar assets as well as taking advantage of new discoveries of vast reserves of oil and gas, the administration said.

According to the International Energy Agency, sub-Saharan Africa will require more than $300 billion in investment to achieve universal electricity access by 2030. As a result, Obama took pains to stress that only with greater private sector investment can the promise of Power Africa be realized.

With the help of an initial set of six partner countries in its first phase, the administration believes Power Africa will add more than 10,000 megawatts of cleaner, more efficient electricity generation capacity in the Sub-Saharan region.

This is enough new capacity to increase electricity access by at least 20 million new households and commercial entities with on-grid, mini-grid, and off-grid solutions.

Obama said the US will kick off Power Africa with an initial set of partner countries, including Ethiopia, Ghana, Kenya, Liberia, Nigeria, and Tanzania.

Each of these countries have set ambitious goals in electric power generation and are making the utility and energy sector reforms to pave the way for investment and growth, he said.

Power Africa will also partner with Uganda and Mozambique on responsible oil and gas resources management.

US government support through the program will include advice on policy and regulatory best practices, pre-feasibility support and capacity building, long-term financing, insurance, guarantees, credit enhancements and other technical assistance.

As broken down by the administration, the $7 billion in US financial support will include:

In addition, in 2014, OPIC and USAID will jointly host an African energy and infrastructure investment conference.  The conference will bring investors, developers, and companies together with U.S. and African government officials to demonstrate the opportunities for investment and the tools and resources available from the U.S. government and other partners to support investment.

Power Africa will also leverage private sector investments, beginning with more than $9 billion in initial commitments from private sector partners to support the development of more than 8,000 megawatts of new electricity generation in sub-Saharan Africa.

Examples of commitments to date include:

The African Finance Corporation intends to invest $250 million in the power sectors of Ghana, Kenya and Nigeria, catalyzing $1 billion in investment in sub-Saharan Africa energy projects.

As described by the president, an interagency Transactions Solutions Team will provide the catalysts needed to bring power and transmission projects to fruition by leveraging financing, insurance, technical assistance, and grant tools from across the U.S. government and our private sector partners.

At the same time, field-based Transaction Advisors, who have already begun their work in each of the partner countries, will help governments prioritize, coordinate, and expedite the implementation of power projects, while simultaneously building the capacity of existing host government ministries to deliver results.

Building host-government capacity to develop, approve, finance and ultimately bring power projects on line is critical to the success of the initiative, the administration said.

In Tanzania for instance, Power Africa will support the “Big Results Now!” program, which is establishing new delivery units within government ministries.  In Nigeria, Power Africa will provide staffing support, capacity building and technical assistance to an existing delivery unit.  Establishment of a delivery unit in Ghana will be closely coordinated with the MCC’s Compact slated for signature in 2014.

Power Africa, Obama said, "is representative of my new approach when it comes to development.

"I believe that the purpose of development should be to build capacity and to help other countries actually to stand on their own feet -- whether it’s in agriculture, in health systems, in electricity," he said.  "Instead of perpetual aid, development has to fuel investment and economic growth so that assistance is no longer necessary, or some of the more successful countries in Africa can start being donors instead of recipients of assistance."

"[I]n order for this to work ... we all have to feel a sense of urgency," Obama continued. We can’t have projects that take, seven, eight, nine years to be approved and to get online.  If we’re going to make this happen, we’ve got to cut through the red tape, and that can only happen with leadership like the leadership that President Kikwete has shown.

"We’ve got to be able to say, when the environmental studies are done, when the planning is done, when the paperwork is done, we can move this approval process, clear the red tape, make sure that the regulatory structure is in place, and get these things up and running in a timely way -- because it’s hard to attract private-sector business if they feel as if their money is going to be tied up forever in uncertainty," he added. "So we want to focus on speed, but we also want to do it right.  And the United States intends to be a strong partner in this process."