Thursday, 22 September 2011
0
Toby Price
A new report by the UK government’s Commons Energy and Climate Change Select Committee has highlighted the benefits of developing a new supergrid connecting European countries’ offshore wind capacity. The report finds that such a grid would drive down capital costs and create thousands of new jobs in the industry. 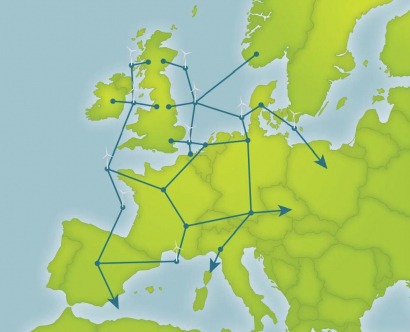 For several years, a group of companies and organisations including DONG Energy, Alstom, Siemens, and Vattenfall that have a mutual interest in promoting and influencing the policy and regulatory framework required to enable large-scale interconnection in Europe have been working together as Friends of the Supergrid (FOSG).

FOSG maintains that a supergrid will form “the electricity transmission backbone of Europe’s decarbonised power sector”, and that it is “essential to meet the EU energy policy goals by 2050”. The entity argues that such a grid “will strengthen the European security of supply by developing large-scale sustainable power generation in remote areas for transmission to centres of consumption” and “will create another global opportunity for European companies to export sustainable energy technology and will finally move the EU towards a single market in electricity”.

Europe’s interest in a supergrid has been steadily rising in recent years. At the end of 2009, Renewable Energy Magazine reported that energy ministers from nine European countries (UK, Germany, France, Belgium, the Netherlands, Luxembourg, Denmark, Sweden and Ireland) had met on the side-lines of an Energy Council meeting in Brussels to sign a political declaration on the North Seas Countries Offshore Grid Initiative.

The agreement followed a report in September 2009 from the European Wind Energy Association (EWEA), which predicted that 10% of Europe's electricity needs could be met by offshore wind, but only if new developments were supported by an extended offshore energy grid. "EWEA's new offshore network plan will provide a truly pan-European electricity superhighway," EWEA chief executive, Christian Kjaer, said at the time. "This will bring affordable electricity to consumers, reduce import dependence, cut carbon dioxide emissions and allow Europe to access its largest domestic energy source – offshore wind."

Meanwhile, back in April of last year, Renewable Energy Magazine was told in an interview with Dr. Achim Woyte, Project Coordinator of the North Sea OffshoreGrid consortium, that an offshore grid is needed to bring offshore wind power to the centres of demand and to further integrate the power markets of Central-West and Northern Europe, and the British Isles. “The main drivers for such a project go hand in hand: Europe wants a common power market with converging electricity prices and this requires sufficient transmission infrastructure to bring power to where it is scarce,” said Woyte. “Since a large share of new power generation will be from on- and offshore wind power plants in and around the North Sea, where resources are more widely available, this is where the large grid upgrades are needed. Therefore, all in all, the question is not whether we need an offshore grid but what it should look like.”

With the support of the likes of DONG Energy, Siemens and other companies in sectors that will deliver the HVDC infrastructure and related technology needed to develop such a supergrid, together with companies that will develop, install, own and operate that infrastructure, FOSG is able to present “cradle to grave” interconnection solutions to policy makers and others looking to develop energy policy across Europe through to 2050.

This level of know-how and experience is giving the concept of a supergrid momentum and encouraging European policymakers to take the project seriously. This month, a report by the UK’s Commons Energy and Climate Change Select Committee concluded positively on the outcome of a European supergrid, despite warning that the cost of developing such a supergrid could be very high.

The Committee found that a supergrid “may bring a host of economic benefits - including tens of thousands of new jobs in the offshore renewable industry” and “could allow the UK to become a net exporter of energy”. The authors of the report also found that it would deliver a 25% capital cost saving on connecting each new offshore wind or marine energy farm compared to connecting each site individually.

"The UK’s electricity system is the least interconnected of all European Countries – but we also have vast offshore resources of renewable energy. In fact, we potentially have enough wind, wave and tidal energy to more than match our North Sea oil and Gas production and transform the country from a net energy importer to a net energy exporter,” explains Tim Yeo MP, Chair of the Energy and Climate Change Committee. “If we continue developing these renewable resources site-by-site it could be prohibitively expensive with large individual connections for each power plant. Developing an integrated and interconnected offshore network would allow us to tap these huge resources cost-efficiently and prepare the ground for a future European Supergrid – if it is necessary and feasible in future."

The Committee found that a European supergrid would enable the UK’s National Grid to balance supply and demand using foreign electricity sources as well as UK ones. This will become increasingly necessary as polluting yet flexible fossil fuel generation is phased out, in favour of clean but intermittent sources of renewable energy.

The committee also argues that an offshore network could provide vital support to the UK’s aging onshore grid and found that coordinating offshore networks could reduce the impact of new transmission on the landscape.

Between 80 and 280 wind farms are likely to be constructed in the North Sea in the next twenty years. The cost and size of these new assets would be prohibitive if single connections to the shore were made, says the report.

The Committee suggests that offshore connections are developing in a haphazard way and need more coordination from the UK government if it is to achieve its ambitious plans for offshore wind. The committee urges the Government to adopt the advice of the committee on Climate Change and provide certainty to investors by making firm commitments to support offshore wind and marine generation through the 2020s in order to create the confidence necessary for anticipatory investment from the private sector.

"Offshore networks can deliver electricity where it's needed without adding to the advancing army of pylons that’s marching its way across our countryside. If we connect our offshore wind farms one by one then we'll see scores of landing points, each twice the size of a football pitch. The Government needs to help industry to cooperate and share their networks. The UK's offshore renewables are too valuable to be left to the Government’s hands-off approach on transmission," adds Tim Yeo.

Responding to the Energy & Climate Change Select Committee report, Eddie O’Connor, President of the Friends of the Supergrid and CEO of Mainstream Renewable Power, said: “We welcome the Committee’s clear support for a European Supergrid as an essential part of the UK’s commitment to reducing carbon emissions and ensuring energy security. The Committee is right to recognise the long term benefits to the UK of making Supergrid a reality. Their support builds on the endorsement of Supergrid by the Prime Minister earlier this year.”

"The UK is an energy island with significant offshore reserves of renewables. To harness these reserves for ourselves, and to enable us to trade them with our neighbours, will require the creation of the electricity equivalent of the oil and gas pipeline network that we have built over the last 40 years. The Committee recognises this, and we support their conclusion that the development of an offshore electricity network is in the UK's national interest," O’Connor went on to add.

His company recently announced the signing of an Agreement for Lease with The Crown Estate for its 450-MW Neart na Gaoithe project in Scottish territorial waters. Located in the Outer Forth Estuary, the wind farm will deliver 3.7% of Scotland’s electricity demand when fully operational. O’Connor believes that “the profound electricity future for Europe is about offshore wind”.

There is still a lot of work to be done though before Europe can reap the benefits a supergrid has to offer. On Monday of this week, for instance, FOSG issued a statement saying that for offshore wind and the supergrid to thrive, “there is a compelling need for an Open Integrated Sea Information System (ISIS)… which predicts and mitigates project risk”.

“Today, investors need to deal with many different and disperse sources of sea data that diminish the efficiency and accuracy needed for this kind of difficult investments despite the large financial expense that such data represents for the projects,” said FOSG. “A comprehensive model of Europe‘s seas is needed, open to all, to help plan, develop, construct and operate offshore wind farms, other marine production technologies and grid investments across this important resource.”

FOSG explains that such a model would act as a decision support tool. Moreover, analytical and foreseeable software tools are needed to predict, identify and mitigate risk. “ISIS would accelerate the pace of development by removing risks, uncertainty, delays and errors which can in some cases amount to 5% of the project cost,” it says, adding that it strongly supports any measure including regulatory, that European institutions would consider necessary to launch a private-public partnership that allows a European ISIS to be put in place. “Industry, academia, legislators and NGOs should all be part of ISIS,” it concludes.