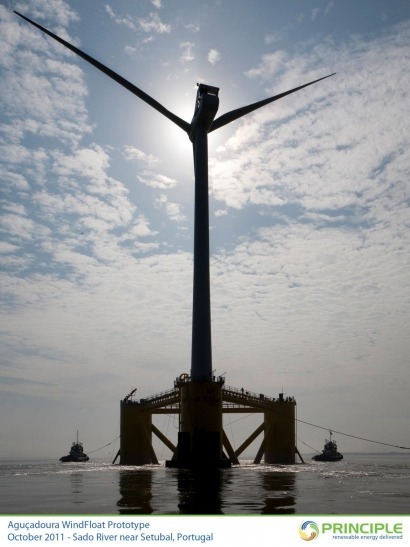 The Energy Technologies Institute (ETI) has chosen US-based Glosten Associates as the designer for its planned floating platform demonstrator. The company will develop a PelaStar tension leg platform (TLP) prototype in partnership with Alstom using their Haliade 150 6MW offshore wind turbine as a basis. Glosten has chosen Harland and Wolff in Belfast to build the demonstrator and the aim is to actually deploy the demonstrator at the ETI test site, Wave Hub in Cornwall.

The ETI has also commissioned a Front End Engineering Design (FEED) study which will take around 12 months to complete at a cost of £4 million. This will then be used to make a decision as to whether to invest up to a further £21 million in the construction and deployment of the TLP which could be located off the UK coastline as early as 2015.

ETI studies reveal that floating wind farms situated in areas of increased wind speeds off the coast of South West England and North West and North East Scotland have the potential to significantly reduce wind farm costs. The turbines would be deployed in waters with a depth of 60 to 100 metres.

“Our modelling work and previous engineering design projects have shown that floating offshore wind farms could play a key role in providing affordable, secure and sustainable energy for the UK as part of a broader and balanced energy system” said Andrew Scott, Programme Manager at ETI’s Offshore Wind division. “Offshore wind though must be affordable and cost competitive with alternative generation technologies. The ability of large floating turbines to access near-to-shore, high wind speed sites off the coast of the UK could bring down the cost of electricity generation for the long term, helping to ensure that low carbon energy from offshore wind achieves costs comparable with other forms of low carbon generation.”

The demonstrator would operate for 8 to 10 years in order to facilitate further design modifications and refinements. Access to high wind areas that are close to shore should prove to be an attractive investment compared to certain existing sites further from the coast in areas of lower wind. The ETI is aiming to reduce costs by accelerating the deployment of floating wind farms in UK waters. Overall, the UK has over a third of the total European potential offshore wind resource which is enough to power the UK nearly three times over. However, exploiting this resource economically, particular in deeper waters off the western coast of the UK, will require significant technology developments to build, operate and support large offshore wind arrays.