Who needs blades when you can have stalks

Friday, 25 November 2011
0
Toby Price
Earlier this year, the New York design firm, Atelier DNA, won a Land Art Generator award at the 2011 World Future Energy Summit in Abu Dhabi for its alternative concept for wind turbines, which substitutes blades in favour of stalks. Resembling thin cattails, the Windstalks generate power as they sway in the wind. 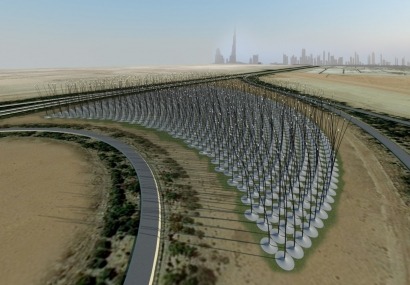 New York design firm, Atelier DNA, has come up with a novel new concept for wind turbines, which does away with the need for turbine blades: a source of noise and a danger to bats and birdlife. The company came up with the idea of flexible stalk-like wind turbines for Masdar, a 2.3-square-mile, carbon-free city outside of Abu Dhabi.

In recognition of its novel concept, Atelier DNA’s Windstalk project came in second in the Land Art Generator competition, a contest sponsored by Madsar to identify the best work of art that generates renewable energy, announced during the 2011 World Future Energy Summit back in January.

Atelier DNA says its project “takes clues from the way the wind sways a field of wheat, or reeds in a marsh”, consisting of 1,203 stalks, 55-metres high, anchored on the ground with concrete bases that range between 10 to 20 metres in diameter. The stalks are made of carbon fibre reinforced resin poles, 30 cm in diameter at the base and 5 cm at the top. The top 50 cm of the poles are lit up by an LED lamp that glows and dims depending on how much the poles are swaying in the wind. When there is no wind–when the poles are still–the lights go dark.

As well as generating their own power, the bases of the Windstalks stalks are shaped like vortices so that when it rains, the rain water slides down the slopes of the bases to collect in the spaces between, concentrating scarce water and allowing wild plants to grow.

Energy While Atelier DNA’s project is primarily artistic, it also sets out to prove that energy can also be generated from works of art. Each hollow pole contains a stack of piezoelectric ceramic discs and electrodes. Every other electrode is connected to each other by a cable that reaches from top to bottom of each pole. One cable connects the even electrodes, and another cable connects the odd ones. When the wind sways the poles, the stack of piezoelectric disks is forced into compression, thus generating a current through the electrodes. Within each concrete base is a hollow chamber that houses a torque generator (similar to the kind being developed by Cambridge, Massachusetts-based Levant Power). The generator converts the kinetic energy of the swaying poles into electrical energy by way of an array of current generating shock absorbers, which convert energy produced by the forced movement of fluid through the shock absorber cylinders.

As the project depends on the wind – an intermittent energy source – the company has incorporated “a kind of battery, a capacitor, a way to store energy” into its design. The energy storage system is actually a type of pumped storage system, whereby part of the electricity generated by the Windstalks powers a set of pumps which move water from a large lower chamber under the field of stalks to an upper one. When there is no wind, the water from the upper chamber flows down again turning the pumps into generators.

“Our project is conceptual, yet it is based on a set of systems that already exist and work. Our project attempts to combine these systems into a coherent synergetic whole,” explains the company, which estimates that the overall output of the project is “comparable to that of a conventional wind turbine array”.

“The idea came from trying to find kinetic models in nature that could be tapped to produce energy,” Atelier DNA’s founding partner, Darío Núñez-Ameni, said at the time of receiving the award. “Our system is very efficient in that there is no friction loss associated with more mechanical systems such as conventional wind turbines.”

Atelier DNA is also working on applying the same principle of using stalks under water by developing Wavestalks, which would generate energy from the flow of ocean currents and waves. The firm’s ultimate objective is to build a commercial-scale system in the United States, either on land or in the water.

The Land Art Generator design competition, which was held for the first time in 2010 was sponsored by Masdar. It was “a first-of-its-kind interdisciplinary collaboration” that brought together global artists, architects, scientists, landscape architects, and engineers to design energy-generating public art installations to be constructed in Dubai and Abu Dhabi.

The winning entry in the 2010 edition was the Lunar Cubit project designed by Robert Flottemesch, Jen DeNike, Johanna Ballhaus, and Adrian P. De Luca for a site on Airport Road near Masdar City.

Lunar Cubit examining “the nature of time through nightly contemplation of lunar phases and daily transformation of sunlight into electricity, powering up to 250 homes”. Inspired by astronomy, quantum physics and the photoelectric effect, for which Einstein received the Nobel Prize in 1921, this work is open to the public, inviting a personal experience where one can literally reach out and touch a 1.74-MW utility scale power plant, in the form of nine monolithic pyramids rising from the sands of Abu Dhabi.

Next year’s edition of Land Art Generator will be held in partnership with New York City's Department of Parks & Recreation. The 2012 Land Art Generator Initiative design competition will be held for a site within Freshkills Park (the former Fresh Kills landfill) in Staten Island. The design brief will be similar to that of the 2010 edition. “LAGI 2012 is an ideas competition to design a site-specific public artwork that, in addition to its conceptual beauty, has the ability to harness energy cleanly from nature and convert it to electricity for the utility grid,” explain the organisers of the competition.