Thursday, 28 December 2017
0
REM
Since November, the German Jordanian University in Madaba, south of the capital Amman, has been producing its own solar power. The 2.11 MW PV plant was installed on Schletter Group roof and carport systems. The project was commissioned by the Jordanian project developer FB Group. 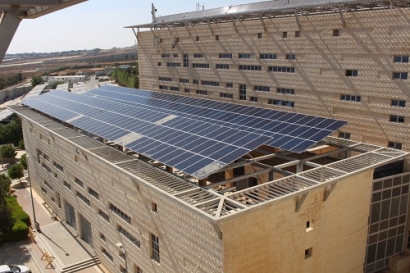 "Projects with universities are always particularly interesting," Adnan Daqa, Sales Manager of the Schletter Group for the Middle East, said. "The installations are not only used for energy generation, but, as in this case they are also integrated into the training of students, to which we are happy to make a contribution."

During the project with the German Jordanian University (GJU), engineering students were, for instance, given technical training on the project even as it was being set up. Once completed, the plant will also be used for research as well as projects.

The photovoltaic system at the GJU in Jordan consists of two roof-mounted and four carport systems distributed throughout the university campus. A total of more than 6,700 solar panels with a combined output of 2.11 MW were installed.

The roof systems are mounted on the Schletter trapezoidal sheet metal systems SingleFIx and IsoTop. A challenge was designing the carport systems. In contrast to the common practice, these had to be adapted to existing parking spaces. For this reason, the systems were individually planned and custom-built to fit exactly. For structural reasons, the carports had to be particularly lightweight and were therefore made of aluminium. In spite of these specific requirements, the entire project was completed within a short period of time. Three months after the order was placed with the Schletter Group in Kirchdorf, the systems arrived on site in Amman.

The installation was carried out by Firas Balasmeh Corporation (FB-Group), with whom the Schletter Group has already completed several major projects in Jordan.