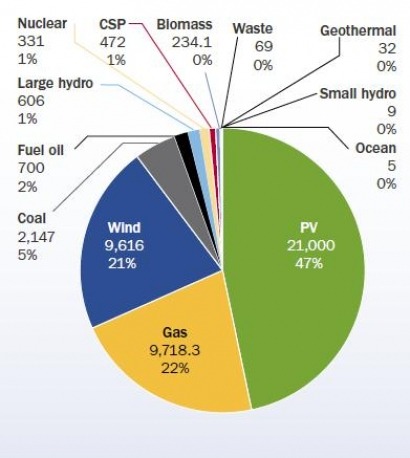 "Despite the economic crisis gripping Europe, the wind industry is still installing solid levels of new capacity", commented Justin Wilkes, Policy Director of EWEA. "But to achieve the EU's long-term targets we need strong growth again in future years. It is critical to send positive signals to investors by European governments maintaining stable policies to support renewables and for the European Union to commit to put in place a binding renewable energy target for 2030."

Growth in onshore installations in Germany and Sweden, and offshore in the UK - together with continuing strong performances from some emerging onshore markets such as Romania - offset a fall in installations in mature markets such as France and Spain. Overall, Germany remains the EU country with the largest installed capacity, followed by Spain, France, Italy and the UK.

Altogether, more renewable power capacity was installed during 2011 than any other year. Renewables accounted for 71.3% of new installations: 32,043 MW - up 37.7% on 2010 installations. Both fuel oil and nuclear power saw a drop last year, with more capacity decommissioned than installed.

In a separate development, at a meeting of the Offshore Wind Developers’ Forum today, co-chaired by DECC Minister Charles Hendry, the United Kingdom’s offshore wind sector has confirm its vision that UK firms should provide more than 50% of the content of future wind farms. Having started from a low base, there is already growth in the proportion of UK content in offshore wind. For example, Robin Rigg windfarm has a UK content of 32%.

Today’s announcement reflects recent developments in the UK’s offshore wind supply chain. In December Siemens announced they are moving forward with a turbine manufacturing plant in Hull. In January the Port of Sheerness submitted a planning application for the development of the manufacturing facility proposed by Vestas. Gamesa have announced their intention to make the UK the main focus of their worldwide offshore wind business. And, just last week, David Brown, a prime example of British engineers at the cutting edge of new technology, announced a major new contract to build gearboxes for Samsung.