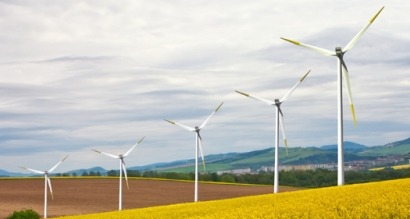 Wind power is the world’s single fastest-growing source of energy, and the UK is one area where this growth is being felt the most. Already in the UK, 3,755 projects are currently operational, producing power for an equivalent of 3,724,444 homes. Allen & York has not only recently expanded its renewable energy team to recruit for the escalating number of wind projects within the UK, but has also responded to a growth in demand for wind professionals within the Nordic.

We have specifically witnessed expansion within the wind power market in Sweden. Swedish wind power is a very young but rapidly growing market. Installed capacity has grown by close to 40% between 2006 and 2010 and a continued high pace of production is expected in coming years. Having so far escaped the worst of the euro zone’s economic crisis, Sweden saw its wind-energy capacity rise by about 744MW last year and around 6.1TWh of Sweden's total electricity was generated by wind in 2011, which is an increase of over 70% on 2012 figures.

Sweden’s wind resources, low population density and availability of balancing sources of energy provide great growth potential for further advancement into the wind sector. The growth and profitability of Swedish wind power drives an increasingly active market, attracting energy producers, developers, utilities, and financial stakeholders; which as a result leads to an increase of job opportunities within Sweden and the wider Nordic region.

In this article Vicky Kenrick from Allen & York explores the reasons for this surge in potential, looking at electricity prices, turbine prices and the investment market before concluding the article by taking a look at the job opportunities being created.

Electricity prices in the Nordic region have been steadily increasing over the past ten years, with an annual growth rate of 15%. Impacting this growth rate in the future will be energy consumption, commodity prices and carbon emission pricing.

It is predicted thateconomic recovery will bring increased electricity consumption, and combined with increased global commodity prices and political initiatives surrounding carbon emission rights this could put renewed pressure on Nordic electricity prices. It is new energy production capacity, specifically from wind power which could counteract this increase in electricity costs. In addition further integration with other European markets via new cables could provide opportunities for the export of carbon-free energy to countries with higher electricity prices and more difficult preconditions for such production.

In fact, Gunnar Fredriksson, Deputy Chief Executive of the Swedish Wind Energy Association, is keen to hear whether the government will accept a proposal by transmission system operator Svenska Kraftnat to address the way grid improvements are handled.

At present, the first company that wants to connect to a grid has to bear the entire cost of any upgrades, while companies that follow pay nothing. Svenska Kraftnat has proposed a fairer distribution of costs, where developers would only pay for the part of the development from which they benefit.

It is wind turbine generators that constitute approximately 80% of total investment cost for a wind energy project. As the turbines are paid for in EUR, expectations of a low EUR/SEK exchange rate in 2012/13 should bring significant benefits for profitability. In 2010, overcapacity among turbine manufacturers created an oversupply of turbines. Combined with continuously increasing competition this has decreased the power that the supplier has and as a result prices for turbines have dropped by approximately 25% compared to 2008. In addition, delivery times have fallen from 2–3 years to only a couple of months.

"The trend towards large turbines - the most common size is 2-3MW - has made the turbines more effective in Swedish wind farms," says Gunnar Fredriksson, Deputy Chief Executive of the Swedish Wind Energy Association.

This preference for larger wind turbines and higher towers is expected to continue.

Therefore, intensified competition among turbine manufacturers and continued technological development bringing lower costs per produced kWh should be of benefit to wind farm developers in the Nordic region during 2012/13. Thus, increasing the speed that new wind farms can be developed.

Denmark, Spain, Portugal, Ireland, Germany, and Sweden continue to dominate when it comes to total installed wind power per capita, while the top countries in new installation capacity per capita in 2011 were Sweden with 80.36MW newly Installed Wind Power per Million People, as well as  Ireland, Cape Verde, Canada, Denmark, Greece, and Germany. 6 000 new wind turbines are planned over the next 15-20 years in Sweden. These are broken down into several hundred wind farms being built in the forests and mountains of Gävleborg, Västernorrland, Västerbotten, Norrbotten and Jämtland. 1 700 wind turbines are planned in Jämtland alone. Gävleborg and Norrbotten have 1 400 turbines marked on the map.

One of the largest investments in wind power in the Nordic region has been announced as recently as June 2012.

As a step towards using only energy from renewable sources in its global operations, IKEA Group is investing in a new wind farm with 30 wind turbines on Glötesvålen, a mountain in Härjedalen, Sweden. Not only is this one of the largest investments to date in a wind power project in the Nordic countries and one of the largest land-based wind power project’s that work has started on so far in Europe during 2012.

This new investment will bring the total number of wind turbines owned by IKEA in Sweden to 39. The new Glötesvålen wind farm is estimated to produce a total of 220 GWh (90MW) a year, equivalent to the annual electricity needs of approximately 48,000 homes. Construction will start this summer and the wind farm is expected to be operational by the end of 2014/beginning of 2015.

“At IKEA, we want to take a leading role in the transition to a low-carbon society by only using 100 percent renewable energy in our global operations. By only using wind power in Sweden, it is an exciting and important step toward reaching that goal. We will not only be self-sufficient in electricity in Sweden, generating enough to supply all IKEA buildings and operations in the country, but it will give us opportunities to supply IKEA stores in other countries with wind power,” says Steve Howard, Chief Sustainability Officer, IKEA Group.

An agreement has been signed with the O2 wind power company to develop, construct and manage the Glötesvålen wind farm.

Johan Ihrfelt, O2’s managing director says “Through its investment in Glötesvålen IKEA has chosen to participate in one of the Nordic countries’ most promising wind power projects in terms of the reliability of the meteorological conditions.”

Where are the job opportunities?

It is predicted that 12,000 jobs will be created in O&M and manufacturing across Sweden; meanwhile strengthening of the grid will also lead to vacancies within Grid & Technology and Engineering. Following the Swedish government announcing plans only last year that 2,000 new wind turbines will be built over the next ten years; we are likely to see a surge in planning, developing and construction roles. At present, Allen & York have a number of vacancies for Project Engineers working for renewable energy developers and would like to hear from you if you have experience in this field.